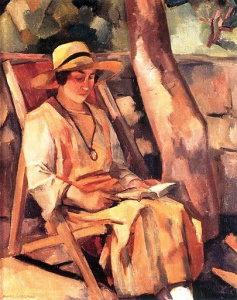 At the back end of last year I set myself the task of reading three books from each of the years in which I have been alive: a contemporary novel, a piece of crime fiction and a children’s book. I got as far as 1949, the year of my birth, before the whole issue of moving reared its head and so the project stalled.  I’m hoping that I will now be able to get back to it and at least complete 1950 before this year is over.

As far as possible my aim was to chose novels that I hadn’t read before, although as I remember commenting at the time, having spent several decades teaching children’s literature it wasn’t going to be easy where that particular category was concerned.  That’s certainly proved to be true for 1950 and to start with I thought I might opt for a re-read of Enid Blyton’s In The Fifth at Malory Towers, one of a series of books which were extremely influential where I was concerned because they taught me that girls could aspire to do more in life than work in a shop or a factory, the careers that most of the women I knew followed.  The fact that all the girls I was reading about obviously came from very different backgrounds to mine never even crossed my mind.  If they could aspire to be teachers, writers, musicians, then so could I.  I’d pretty much decided to track down a copy of Blyton’s book when I suddenly noticed that the first of Lorna Hill’s ballet series, A Dream of Sadlers Wells, was published that year.  Now I never wanted to be a ballerina, I never wanted to be a dancer of any sort, but I did enjoy those books. So, a secondhand copy is winging its way to me even as I write and I am fairly certain that that is where I shall begin my exploration of the 1950s.

Where the other two books are concerned, I have been able to select new reads.  I thought I would stumble over the crime novel but then discovered that one of Josephine Tey’s Alan Grant series, To Love and Be Wise came out in 1950. I’ve read the better known  books in the sequence but not this one and have been able to track down a library copy so that is my detective fix sorted.

As for the contemporary novel there was really no competition.  I’ve recognised for a long time that a disgraceful gap in my reading has been my ignorance of the works of Barbara Pym.  I keep saying that I’ll do something about it and then never get round to making the effort.  Some Tame Gazelle is a 1950 publication and so reading that will kill the proverbial two birds with one book.  That’s on order from the library as well.

I don’t aim to read more than one of these a month and I know that as soon as the Lorna Hill arrives I shall foresake all others and devour it straight away, so that is the review you can expect first.  In the meantime, what do you think of my choices?  Do you approve or are there other books that you think I should have chosen instead?